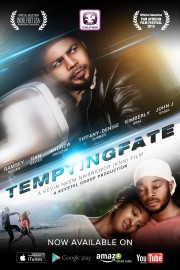 “This is a story about two brothers, one of deep faith and the other buried in a life of crime, doing all they can to make it through their tumultuous and convoluted lives,” said Nwankwor. “Edu, the younger brother who is a talented and spiritual singer, is diagnosed with a life threatening illness. His older brother, Ugo, attempts to get the money his brother needs for a life-saving procedure in an illegally and immoral way.”

Tempting Fate has its own original score, written and recorded by Gonzalez Arbuna, Daniel Berk, and Folorunso Obilana. The result of many months of hard work, collaboration, and persistence, Tempting Fate is a quality film production completed by an all-star team of talent: Emmaneul Ojeah, Executive Producer, Unoma Nwankwor, Award-winning writer and producer, and DP Sulekh Suman, Producer. A movie that deeply taps into human intuition, forgiveness and emotion, Tempting Fate has something for everyone in it.

“This movie is about the triumph of love and forgiveness above all else,” said Nwankwor. “Though we may choose different paths along the way, at the end of the day, people act out of love. Tempting Fate is a reflection on the various backgrounds we come from and how they can collide years in the future. And, most importantly, it’s about forgiving along the way. Check out this unforgettable movie today.”

“It is a very good movie. It is one I would recommend for everyone to see. The actors were phenomenal, and this movie takes your expectations two notches higher when you’re done watching it. Go see it today,” said Hon. Desmond Elliot, Member of the Lagos House of Assembly.

Tempting Fate is available on Amazon, iTunes, Google Play, and YouTube. Officially released for viewing worldwide, consider watching a movie that taps into the deepest of innate human characteristics and emotions.

For more information, to watch the extended trailer, or to stay up-to-date with Nwankwor’s future projects, visit: http://kevinnwankwor.com/.