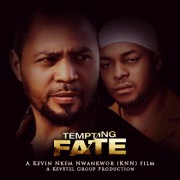 The highly talked about and “must see” film “Tempting Fate” stars Nollywood movie icon Ramsey Nouah who plays the part of Ugo. He is one of two brothers who are portrayed in the film following two very different paths in life. Ugo finds the life of crime appealing and is encouraged to do so by Scorpion, the gang leader characterized by the much acclaimed Hollywood actor Dan Davies. Edu is the calm devoted Christian brother of Ugo, who is afflicted with a life threatening illness. Edu is portrayed by debuting upcoming Hollywood actor Andrew Onochie. John Vogel provides an amazing performance as Detective Travis. The upcoming star studded cast consists of Tiffany Denise Turner as Tracey, Edu’s girlfriend, along with many other exceptional actors and actresses.

"I do not want to Kill you, not because I like you but because you owe me.

The Soundtrack for “Tempting Fate” is also available now at Amazon.com. This soundtrack is compiled by gifted performers such as Folorunso Obilana, Pedro Gonzalez Arbona, and Daniel Berk, along with featured artist  Jacobed Melgarejo.