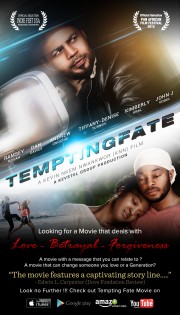 Lawrenceville, GA, April 4, 2016 (Newswire.com) - Tempting Fate, a 2015 Nigerian American film written, directed, and produced by Kevin Nwankwor, will be available for church and school screenings this summer in Lagos, Abuja, PortHarcourt, Benin and Owerri. Seeking all interested churches and schools in the designated areas, the Tempting Fate production crew will set up a movie screening at specified locations, host a Q&A session following the film, and meet with local communities about the meaning of love, forgiveness, and faith above all else.

“We are encouraging all churches and schools to jump on this incredible opportunity for showcasing real-life obstacles and how, through God, it is possible to overcome anything,” said Kevin Nwankwor. “A church movie night is an wonderfully powerful and impactful way to communicate important teachings with surrounding communities through an easy-to-view and easy to understand method. Movies inspire discussions about faith all the time – use Tempting Fate as a way to spur those important topics.”

Can anything stop you from loving your brother?

Tempting Fate is a powerful tale unlike any other that truly dissects the meaning of love, betrayal, and forgiveness through a suspenseful and emotion film. A story of two very different brothers, one from a life of faith and kindness, and the other from a life of gangs and crimes, Tempting Fate illustrates the emotions, connections, and misunderstanding that results when two very different people of the same background cross paths.

A film that received many positive reviews from its debut at the 2015 Pan American Film Festival event, viewers near and far are also praising the movie for its perfectly crafted and worship soundtrack. The ideal music to showcase among a church community, the Tempting Fate Soundtrack will leave all attendees emotional and connected through their love for God.

“Let us bring this movie to your church. There is a required audio visual system that we need to check out the day before the screening. We are willing to work with any community no matter the constraints for showcasing this important and thought provoking film.”

The Director and Producer of the film will be present at each screening to take questions directly after. The film is two hours long, and attendees should anticipate 45 minutes to an hour of questions after the screening. If church auditoriums cannot accommodate all interested viewers, the Tempting Fate crew is willing to do multiple screenings at the same location.

For more information, or to sign up for this unforgettable and personal Tempting Fate screening and faith-based discussion, visit: http://kevinnwankwor.com/movie-night/.