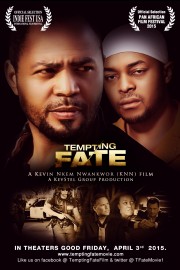 Lawrenceville, Georgia, January 20, 2015 (Newswire.com) - “Tempting Fate” is an official selection film chosen to be premiered at the 2015 Pan African Film Festival at the very prestigious Rave Cinema in Hollywood February 5, 2015, and also at the USA Indie Fest. A heart touching film that depicts deep brotherly love, where two different paths in life can be taken with an unintended outcome. A “must see” film for those who can at any time face a cross road in their life. “Tempting Fate” is as an all-around inspiring film much like those so successfully produced by Tyler Perry, or T.J. Jake’s, “Heaven is For Real”.

It is a story of two brothers while being blood related have two very different approaches to life. Edu played by Andrew Onochie who is making his first Hollywood debut is the brother with the calm and peaceful nature, yet is dealing with a life threatening illness. Edu relies on his spirituality to walk him through life, hand in hand with his girlfriend Tracy, played by Tiffany Denise Turner.  His brother, Ugo portrayed by Ramsey Nouah, is the hot headed brother. He has chosen a life of crime to which his brother Edu ends up paying the price for. Ugo is spurred along his path of crime by Dan Davies playing the part of Scorpion as the gang leader. The love Ugo has for Edu prevails as Ugo attempts to get the money needed for a lifesaving procedure for Edu, but results in a chain of events that serves to open up a world of hurt, betrayal and deception.

“Tempting Fate” is a Hollywood meet Nollywood production shot in Hollywood utilizing the latest technology and supported by Panavision, red. This heart touching movie has been directed by Kevin Nkem Nwankwor (KNN), who is making his directorial debut. Directory of photography is Sulekhh Suman. Executive producers are Emmanuel Ojeah and Unoma Nwankwor. Events Company is Starbrands Ltd.